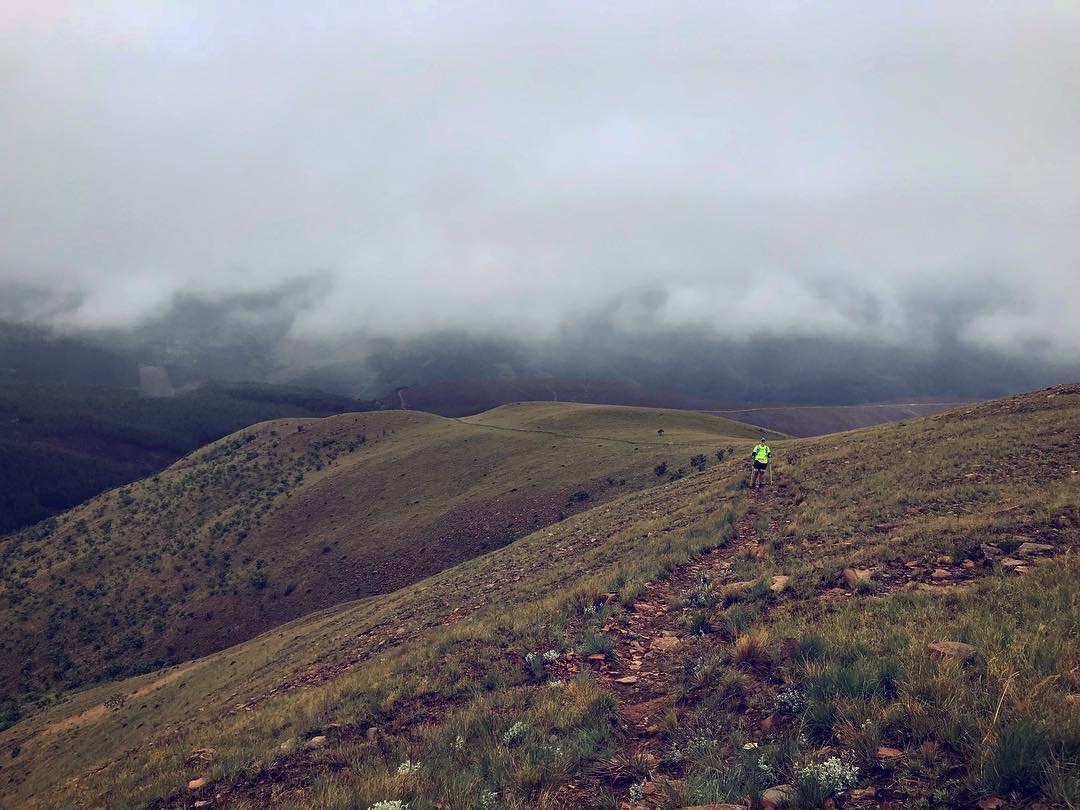 Blog time after a some uneventful training weeks. My training has escalated to hills, hills and more hills. Last weekend I had a spectacular melt down after 6 repeats of the famous GOAT at Kloofendal. I was tired, I had a rough week and all my demons came to haunt me. When I get tired on the trails (especially during training) I start to doubt myself and it all seems too much. I am so extremely frustrated at the moment with the fact that I can’t seem to speed up on the trails. I am training so hard but something seems to be holding me back. However, I have committed to starting to be positive about my running and try put those demons to bed.

So this last weekend was the Uitsoek Mountain Marathon which I planned to use as a training run to gauge where I am. I put no pressure on myself and I wasn’t stressed about it. It did help that there were no cut offs looming. I promised a certain trail buddy (Peter Yberburg) that I will from now on believe in myself. I went to into Uitsoek with this attitude and it paid off. I enjoyed every minute of the race. I spent the first 10km of the race with my favourite trail buddy Darren Smith which was special. I also got to spend a few kilometres with my Bubbly Linda Rorich who had never experienced a trail like this. I think she is hooked…. 🙂 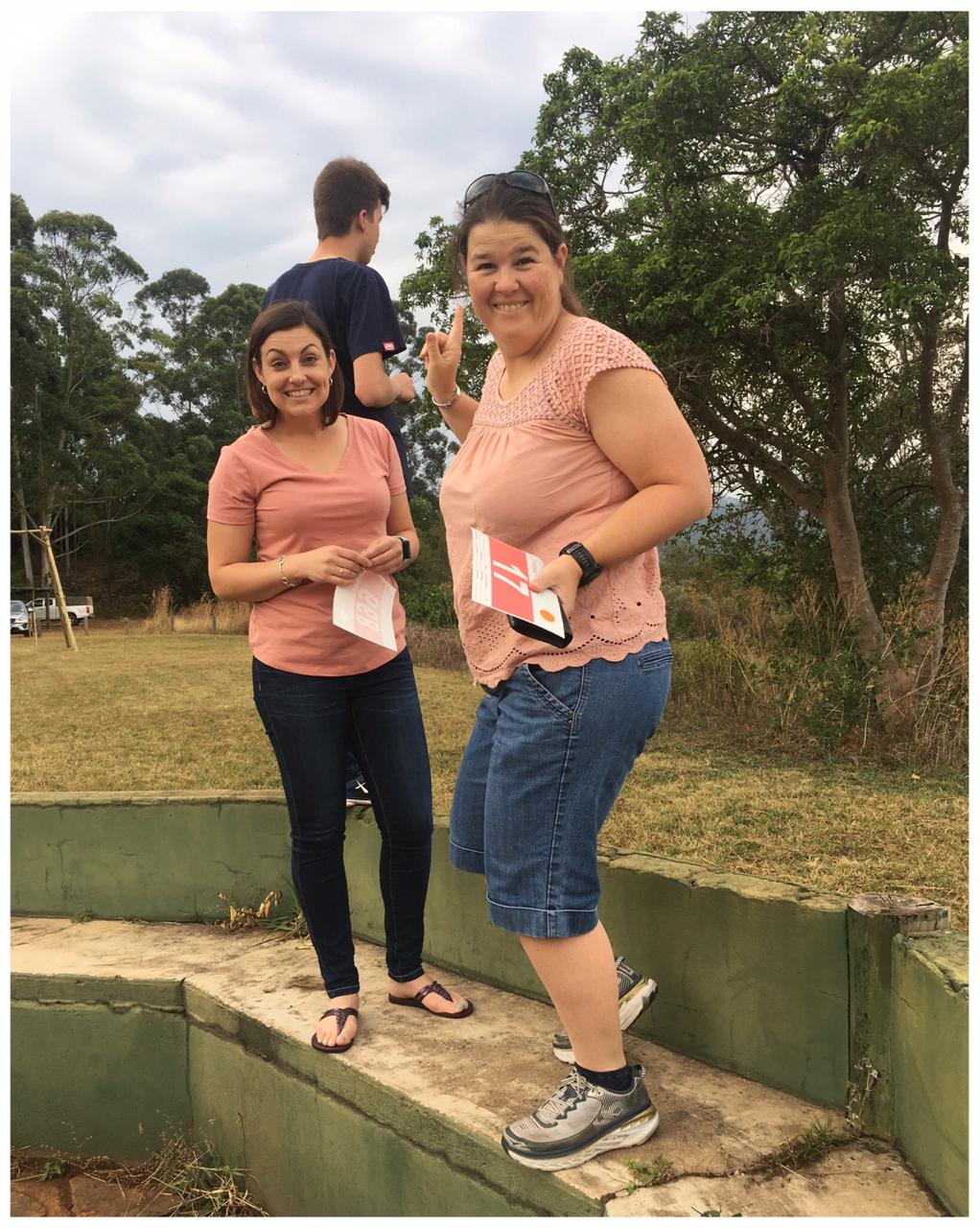 The race certainly has to be one my favourites. The indigenous forest and grasslands made my heart sing. I pretended not to see the pine plantations LOL. The mud in the forest slowed me down unfortunately but I really didn’t want to get injured. I nearly bought a farm a few times. My trekking poles were a real lifesaver and I managed to stay on my feet. One of the many river walkways that we crossed however nearly brought about a spectacular face plant which was only saved by my poles. The wire on the walkway caught my shoe and ripped the whole toe box open. My toes kept popping out after that! I tried to strap them with some of my ankle strapping but it fell off after 3 kms. The Hoka’s are now in the bin… RIP

I may have been slow but I have never felt so strong on a race. I used my hill counting and rested on the climbs and I felt amazing when I got to the top. I never once felt defeated and I had good spirits the whole way through. Had great fun getting to know the sweeper Toy Dupper who recently completed the Karkloof 100 miler. He was a great motivator and we were gunning for 8 maybe 9 hours. The mud had other ideas however and the sneaky climb out of the kloof was a bit mean, but when I got to the top I knew all the climbing was done and I was on the home stretch. I had a new spring in my step and I was off. Poor Toy was laden with all the markers and I couldn’t even see him behind me in the mist. I just thought the mist was thick because we were at the highest point and it didn’t phase me. I wasn’t cold, I didn’t even have my rain jacket on anymore. I saw a green light drifting in the mist and thought it was a check point. I waltzed up to them and was veering left with the markers. I was quite chuffed because it looked like I had caught the guy I had seen on the contour paths ahead of me. He said to me that they are taking us off because of the weather. I thought he was kidding, laughed and carried on going. I then turned around because no one laughed…. So yes they took us off the mountain at 28km. They said the conditions were changing too drastically and the muddy route back would be too treacherous in the dark. The temperature was dropping drastically so Search and Rescue made the call. I wasn’t too disappointed to miss the mud but I was disappointed because I felt so good and didn’t need to stop. I had prepared for a long day with a head torch packed. So I have some unfinished business at Uitsoek that I will need to address. I will have no problem going back though and really think I will make this one a regular. Sven and his team have a real gem. I would just like some sunshine and dry trails next year please! 🙂 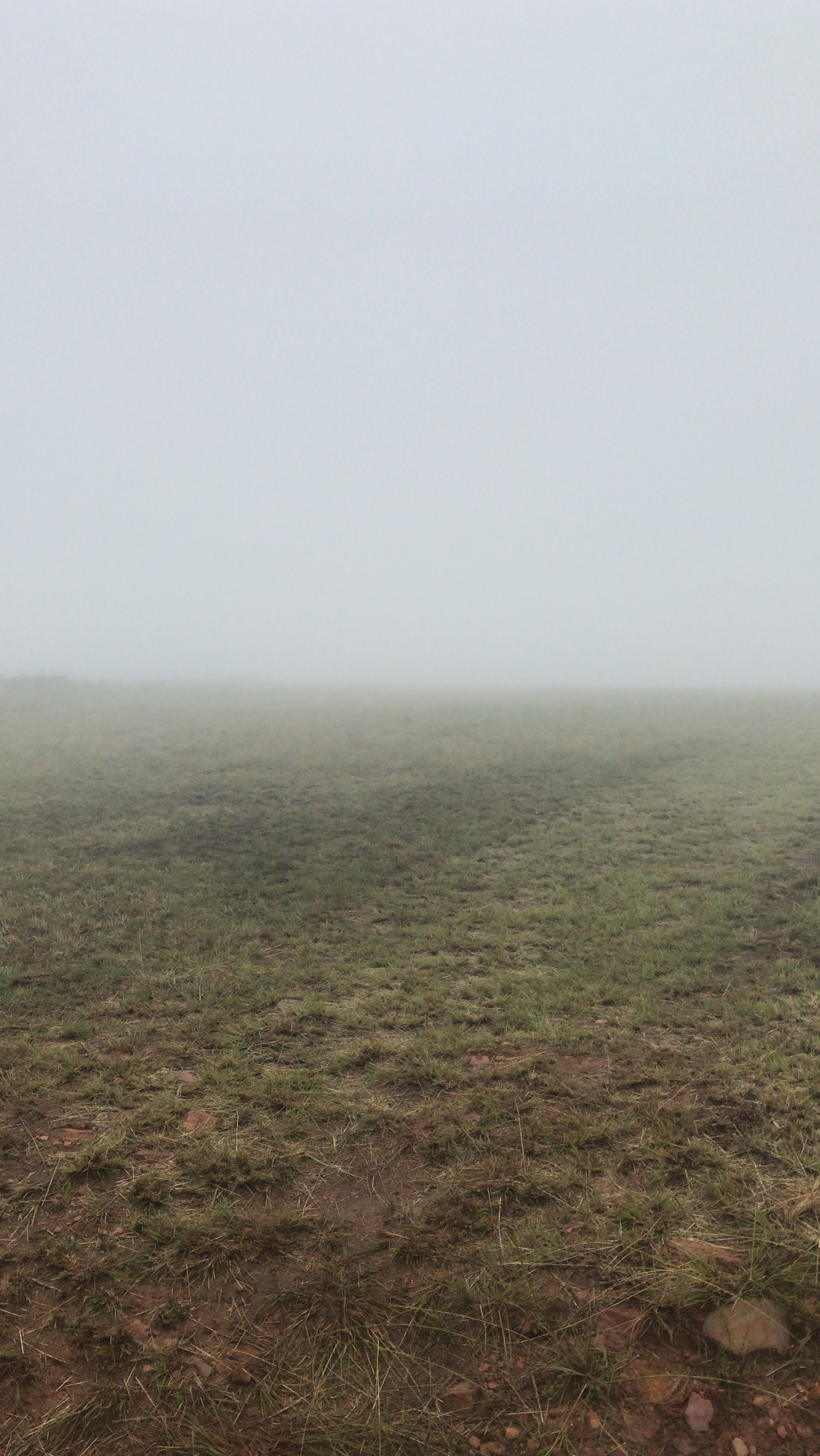 This is what it looked like when they took us off

The important lesson is that I achieved what I wanted to and that was to get the elevation without dying. I am still however very frustrated with my pace. I can’t seem to get any faster. I have been losing weight (ok not as fast as I would like – I love food too much) and I have been training so hard so why can’t I get that little bit faster. I am going for blood tests today to see if there is something physiological holding me back. Not sure if my iron levels or something may be out of wack. I hope it is something that simple which I can fix easily. I will be so happy. I know I can do UTCT now. I just need to get past those cut offs. I don’t want to have to stress about them. I want to have the same attitude as I did this weekend at Uitsoek. Just go and have fun. With a little bit of speed and an awesome trail buddy with me (I am saving this titbit for a special blog) I know I can do it. 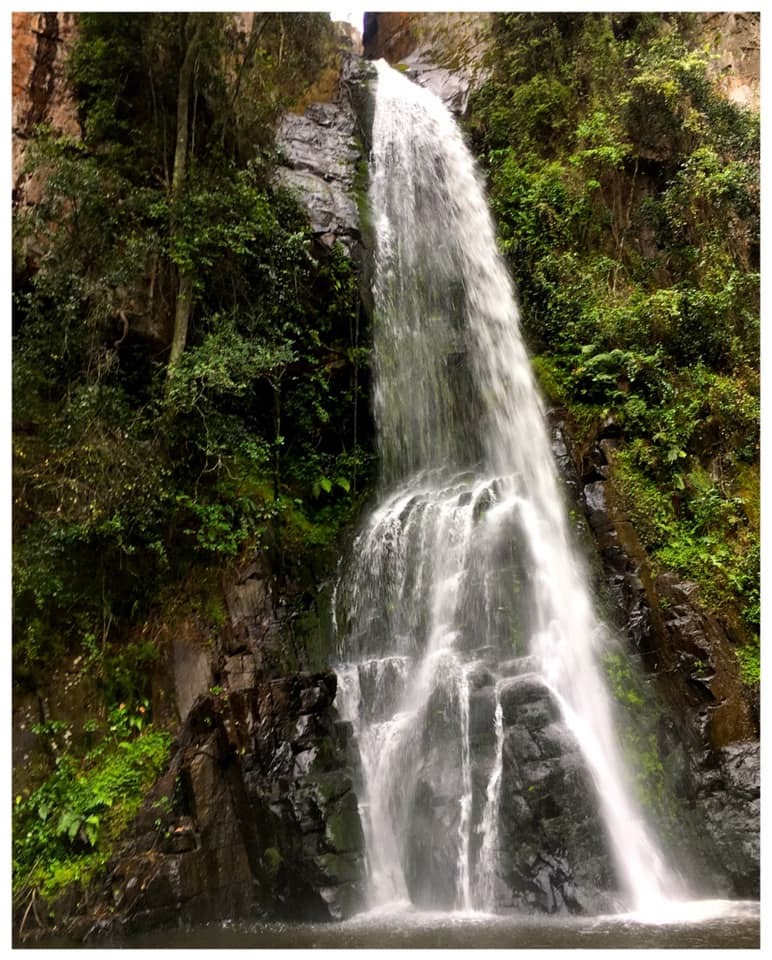 I leave you with a pic (Darren Smith) of the waterfall at our first water table manned by Otter hopeful Johardt van Heerden. It doesn’t get much better than this.

So I am Knysna this week to visit my sister and family and experience some of the trails and races on this side of the world. I will report back on those next week.

My training has certainly been upped by both my coach and trainer at the moment. I have been feeling rather shattered this week but I remind myself that it will all be worth it in December!! I have even given up horse riding which I had to stop when I broke my ankle last year which is rather sad but I will be back for horse therapy soon enough!

Part of my programme at the moment is do improve my consistency and build some speed. I can certainly feel the difference in my training as the runs seemed to be getting that little bit easier in terms of actually running with less walking. This is a small victory which I will take!

A critical part of this training is hill repeats and I have them once a week in my programme. Making these easier has been the fact that I have had awesome company for these sessions for the last few weeks. Doing these mean sessions alone is torture so having my running buddies with me has been awesome. Linda, Darren and Hennie have been enduring the hills of Randburg for their sins! I think the drivers who pass us think we are nuts going up and down and often collapsing in a heap at the top of the hill. Must be quite humorous to watch to be honest.

This week Tuesday I got to the club to do hill repeats with Hennie and was horrified to learn that I had left my sports bra at home. Now ordinarily I would have turned around and gone straight home because those who know me will know that I am not the smallest of people and sports bra’s are rather critical to my running kit. But because of the fact that Hennie was joining me and that I couldn’t let him down, I decided to grin and bear it and run…..well… I learnt the following:

Ja it wasn’t great hey. I was so uncomfortable and I told Hennie once we actually completed the hill repeats that I was walking back to the club and not running. He however didn’t object after our tough session! LOL

All my running buddies will fully comprehend the challenge of chafing on a run. It is a real problem. When I first started running I didn’t have the correct equipment. A good sports bra for my size will put you back a good R1000 so I needed to know that I was actually going to run and stay running. I have subsequently invested in some awesome Anita and CW-X ones and they are the best. However back when I started running I learnt about chafing the hard way. I am quite sure I am not the only one who got the rude awakening when getting into the shower after chafing the first time! When that sweat runs down your body in the shower and reaches any chafe marks on your body it isn’t pretty! Some choice swear words were certainly heard from me and are still heard when it happens periodically! There should be a runner starter kit for newbies!!!

I have heard some hilarious recounts of chafing horror stories after long races which are all fine and well to recount after the time but not so funny at the time I am sure. It is one of the main reasons you should not wear new gear on race day! One of my good friends wore her Compressport tights for the first time at Two Oceans and got a rather rude awakening after the race. Luckily we had lots of wine to make it better….. I always feel sorry when I see guys running in after a race with these long red blood trails on their shirts from nipple chafing!! Eina!!! Plasters are your friends guys. I had to bring plasters to Lion Park at Comrades this year for a friend who had forgotten his! I think he owes me some bubbly……

Luckily we now have anti-chafing miracle creams which we all swear by. I do not go anywhere near a race of more than 10km without being lathered from head to toe with Bennetts baby bum cream. It is honestly amazing stuff and I even use it on my toes to avoid blisters.

So the moral of the story is….never forget your your sports bra girls:-)